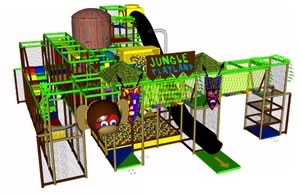 After 30 some years, that standard indoor play structure is still the number one activity when it comes to driving traffic and party guests at the local children's entertainment center, or indoor party center business. Indoor playgrounds, soft play, climbing structure, jungle gym, soft modular play or simple playground equipment - whatever you call it, soft indoor playgrounds have really stood the test of time as a successful amusement attraction.

If you target young families with kids aged 2 to 12 years old, there are only a couple of activity options for gross-play that have good through-put, low staffing requirements and minimal ongoing maintenance; soft indoor playgrounds and inflatable jumpers. There are other activities that have capacity for good through-put, like miniature golf, laser tag, some carnival type rides and high ropes course. But all of these require either more build-out expense, staffing and/or regular maintenance.

We all know inflatable bounce houses and jumpers are by far the cheapest way to get into and call yourself an "indoor party center" business. However, these inflatable bounce houses are a dime a dozen, often very noisy and are really a one-trick pony that mostly offers jumps and slides. In this writers opinion, your typical bounce house business could be a good business to start, in terms of capital required. However at the sign of your success others who are counting cars in your parking lot on a Saturday afternoon may be eager to get in on your action, and can do so by creating a better experience with the addition of a soft indoor playground structure.

Creating a successful, long term children's entertainment center business is not just about how cheap can we do it, or how many inflatables we can stuff into an old warehouse. Nor is it about building the largest indoor soft contained playground you can afford and just watching the cash roll in. I would suggest, that the best formula for creating a successful indoor party center is to look at creating a purposeful design indoor playground climbing structure as the anchor attraction with an assortment of complimentary activities and a superior guest experience.

For this article, lets just focus on the indoor play equipment.

Indoor playgrounds simply offer more play ability through a diversity of activities. Climbing, sliding, crawling, jumping, swinging, plus the added stimulation of a multi-level playground structure that encourages kids to think creatively as they explore a multi-dimension environment. I have nothing against inflatables jumpers or bounce houses, but I do see a lot of new amusement entrepreneurs who build their long term financial expectations on throwing 5 or 6 blow-ups into a warehouse and waiting for the customers to pour in. There is a place for inflatables as part of well designed attraction mix for a children's entertainment center, but I think (and the market has validated) the long term profitability of an inflatable only type business, is a difficult, low margin business to be in.

On the other side of the coin, looking for the cheapest indoor playground equipment from China, or trying to find a used playground and make it new, are expensive lessons waiting to happen. I know from receiving literally hundreds of emails a month from Chinese manufacturers, that they are very eager and flooding the North American market with offers to buy competitive designs at 70% off pricing. Recently, one of our Startup Academy graduates, went against our best advice, and was lured into the attractive price-based decision to purchase an indoor playground from China. Having received quotes here in North America for upwards of $180,000 - $200,000 USD for a rather large 70' x 40' 3-level soft play climbing structure, he decided the $70,000 indoor playground from China, at the same size with even more activities (so he was told) was a much better buy.

The promise of great savings clouded his judgement and apparently disabled his hearing, because a couple of things we discussed during the academy program went in one ear and out the other. First off, these guys wanted 90% payment before they would ship the indoor playground, and the balance due at port before they would release to container - are you crazy? Are you going to give these guys full payment BEFORE you see your product? See what low prices do to people. Once the shipment arrived at the location, it sat for close to a month because the installers from China who were going to set it up were late on arrival. Once the installers did arrive, there was one guy instead of the 5 that were promised. 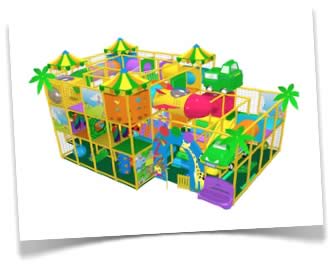 This did a couple of ugly things. First, he had to pay extra for onsite storage of the container. Secondly, he had to scramble locally to try and find some Chinese speaking labor he could hire to help the installer from China, which cost him more money. A late start with less labor then agreed upon delayed the opening of the center, and he lost money on initial marketing. The construction delay ate into the three months free lease he negotiated, affecting his projected first year gross revenues. It also trickled everything down the line, delayed the hiring and training of staff, and it caused him to miss the seasonal group opportunities prior to Christmas. And guess what - because it was paid in advance, the buyer had no recourse but to suck it up and try to get it completed asap.

Once the playground equipment was finally installed and finished, the biggest slap in the face was, unknown to him all of the playground grids were 4 feet tall, including the lower level where guests enter the play structure. This is bad news because you now have a very restrictive anchor attraction that is difficult, if not comfortably impossible for adults and/or staff to get into the playground. No big deal you say? Well, in this case it was a big deal, because the fec business plan and financial projections were based on the local community and a target audience of 2 to 12 year olds. I hate to break it to you, but 12 year olds are not going to have fun crawling around in 4 foot grids. For that matter, most 8 year olds will not either.

So, one year later, his gross numbers are about 65% of what they should be, and the toll on his initial business branding (for ages 2 - 12 years old) has gone out the window, now that the community has branded him an indoor play center for 8 year olds and younger. Ouch!

This is just such a shame, because the location offered wide open, 24 foot ceilings with lots of room for beautiful fast slides and a big, open and inviting ground level that would have encouraged adults to enter and participate with their children along with easier access for staff to monitor and nurture the play experience. In this case, the cheapest indoor playground was not the bargain it initially looked like.

Price is important, we all know that. But I hear similar stories to this one more and more as new amusement developers look to get started "on the cheap". There are many things to be aware of as you head down the road to fec startup, but at the end of the day, keep in mind that it is the guest experience you deliver that will ultimately determine your community success. Balancing the right attractions for your business goals and local market opportunity is paramount to indoor party center success.

Got something to say? We're looking for you. Amusement attraction owners who want to be mentors, email us here.

Looking for the best selection of amusement equipment and suppliers?  Use our One-Stop Catalog request form. Click here.